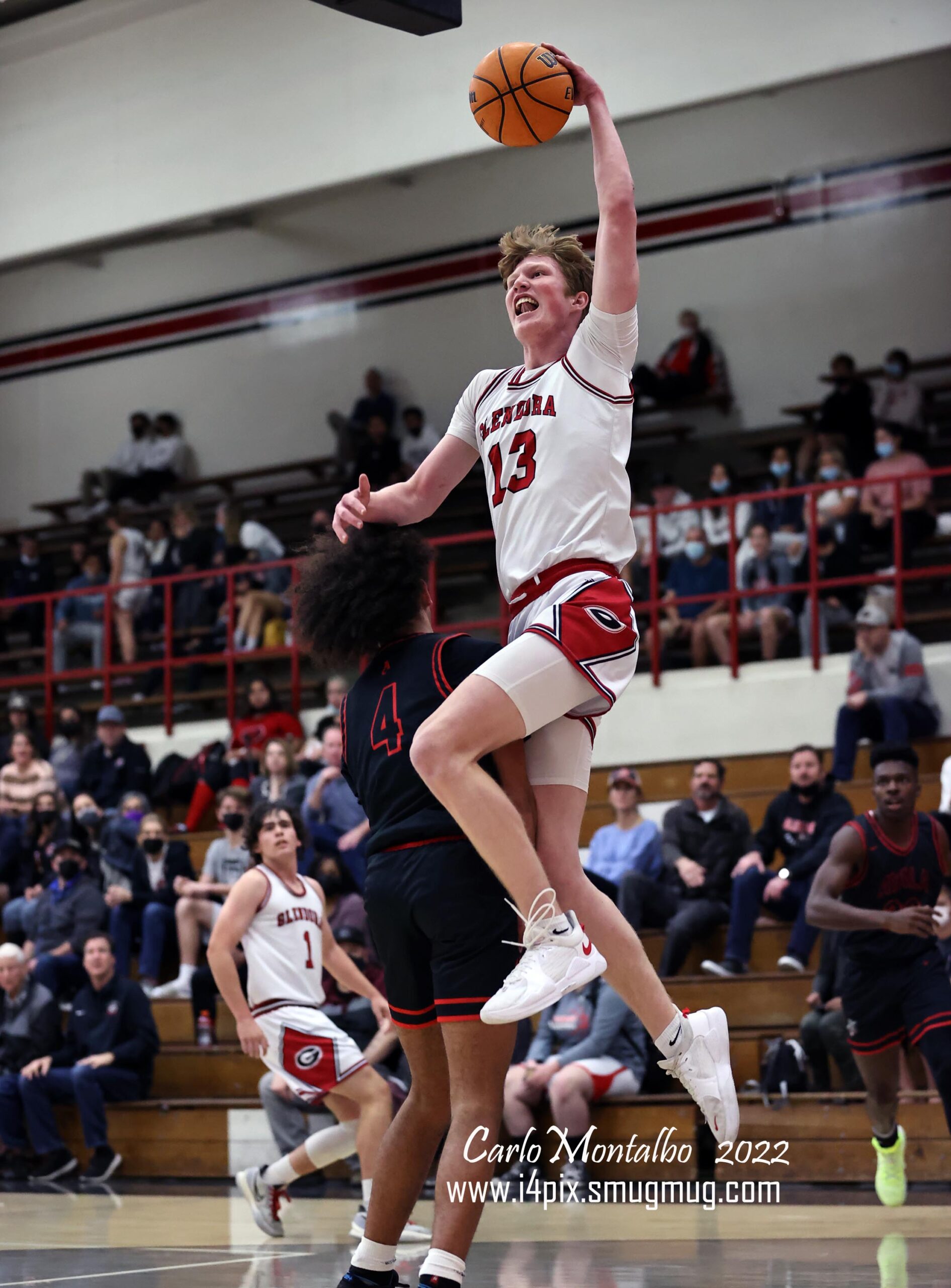 Photos by Carlo Montalbo Boys Basketball: Glendora and Ayala met up Monday night with identical 3-1 records in Palomares League play. The Tartans and Bulldogs were one-game back of first-place Colony. And with five games remaining, GHS took a one-game lead for second place after their 62-48 victory over their visitors from Ayala. Glendora erased […] 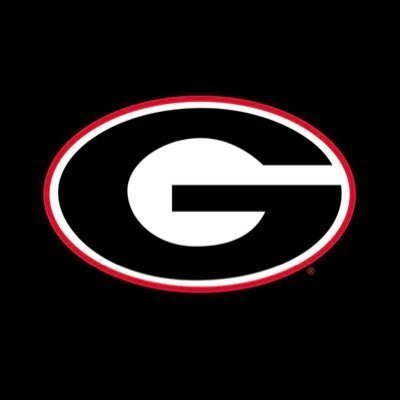 Girls Basketball: After a week off due to Covid protocol, the Glendora girls program bounced back and won three of the four games they’ve played since Tuesday. On Tuesday, the Tartans began the week with a nine-point setback at Claremont. GHS would then pick up Palomares League road victories at Colony (73-33) and Alta Loma […]

Girls Basketball: Oh, so close. Rio Hondo Prep came within a bucket of handing Flintridge Prep its first Prep League setback since January 6, 2016. The hobbled Wolves (missing their second and third leading scorers) held on for a 53-52 road victory. Flintridge Prep’s stud, Ashley Chea, continues to shine and finished with a game-high […] 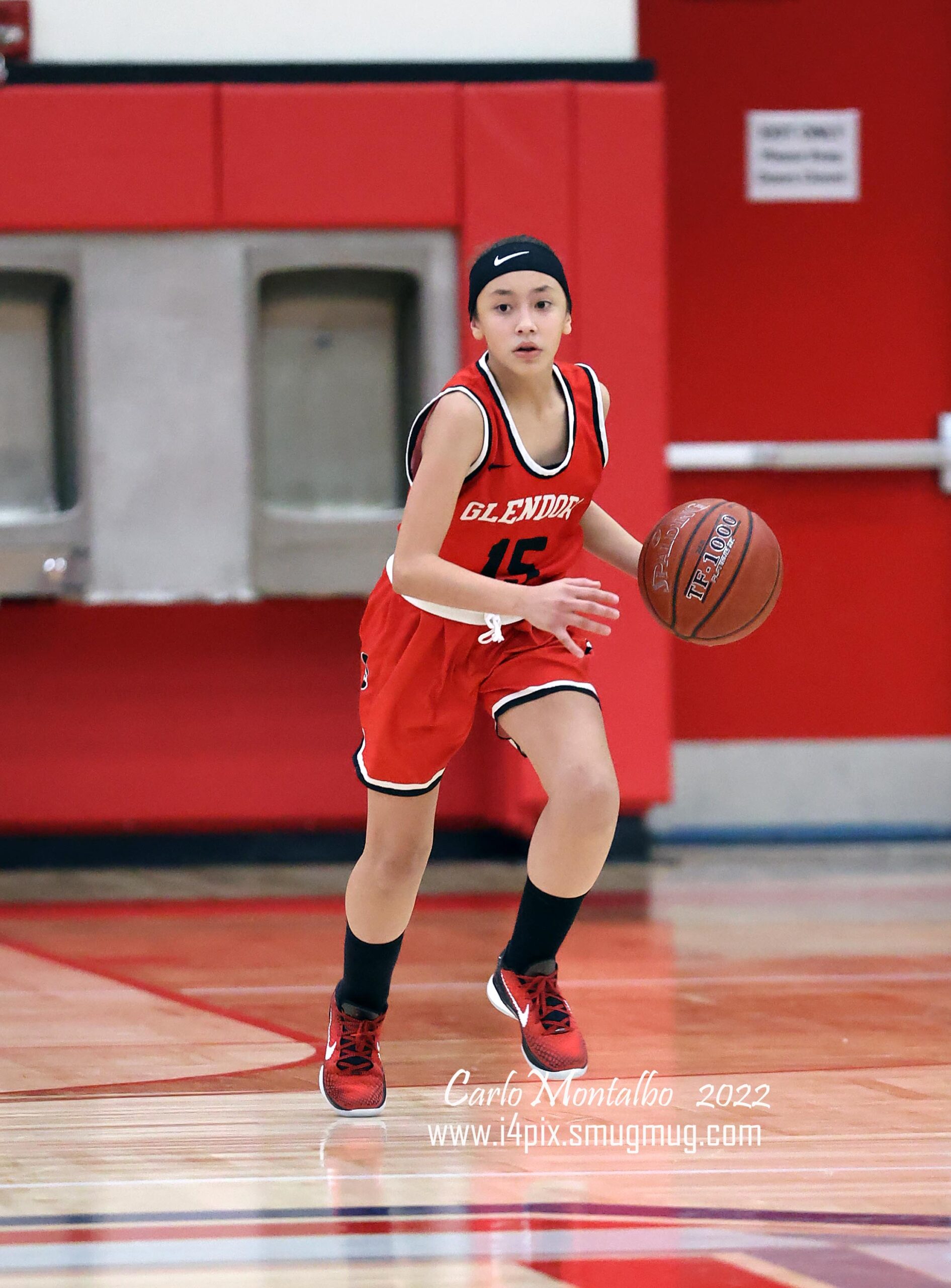 Photos by Carlo Montalbo Girls Basketball: Glendora picked up its first Palomares League victory of the 2021-22 season on Wednesday. The Tartans used a 29-6 run in the third quarter to secure a 73-33 victory. Hailey Schaffer led the Tartans offense with 16 points. Emma Barnett chipped in with 13 points. Up next: The Tartans will […] 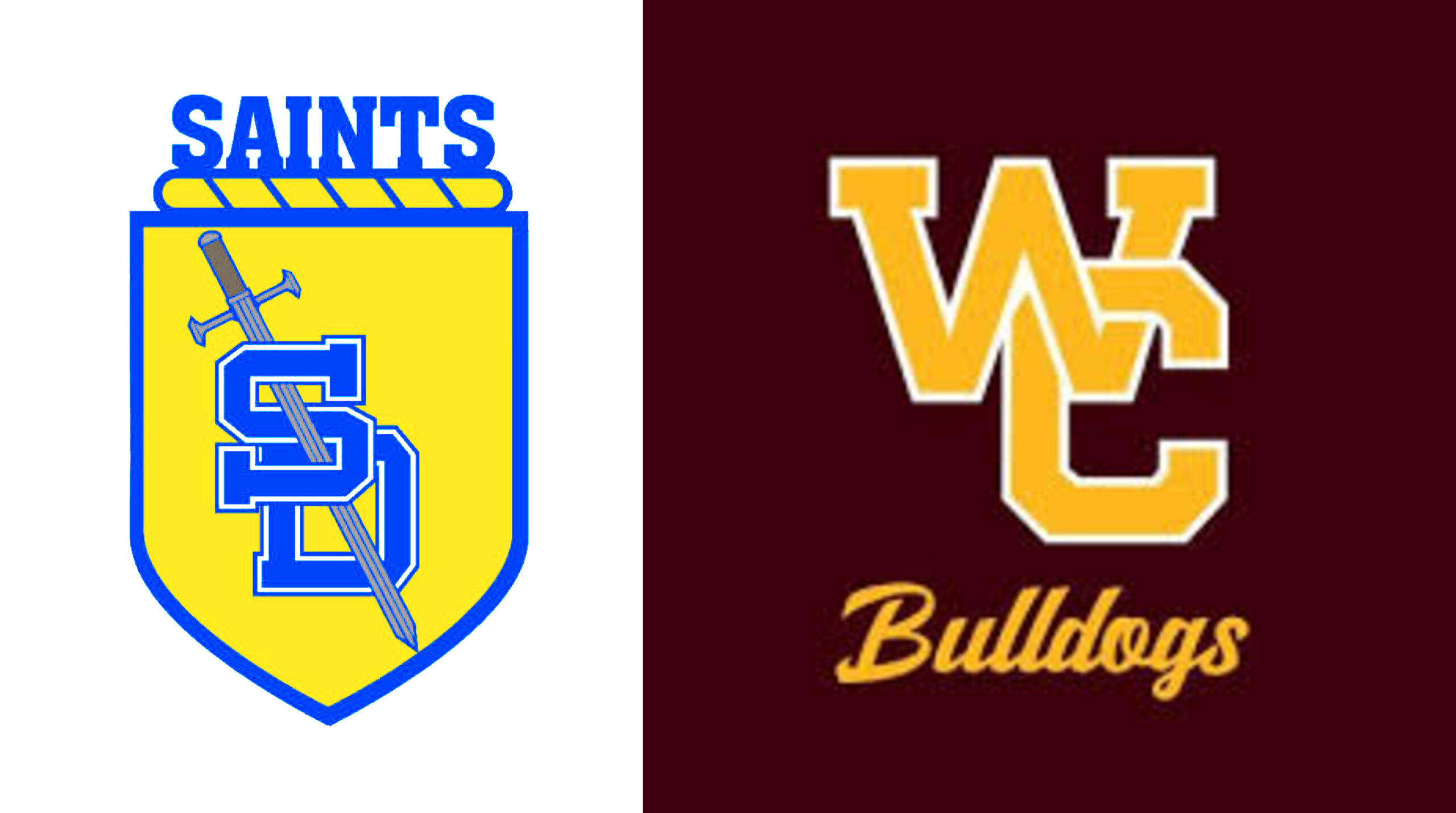 Girls Basketball: San Dimas bolstered its spot atop the Valle Vista League with victories over West Covina and Diamond Ranch. On Tuesday, the Saints picked up a 54-47 win at West Covina. SDHS outscored WCHS 29-18 in the second half to secure the victory. The Saints’ Janessa Rodriguez (16) and Olivia Romero (14) combined for […] 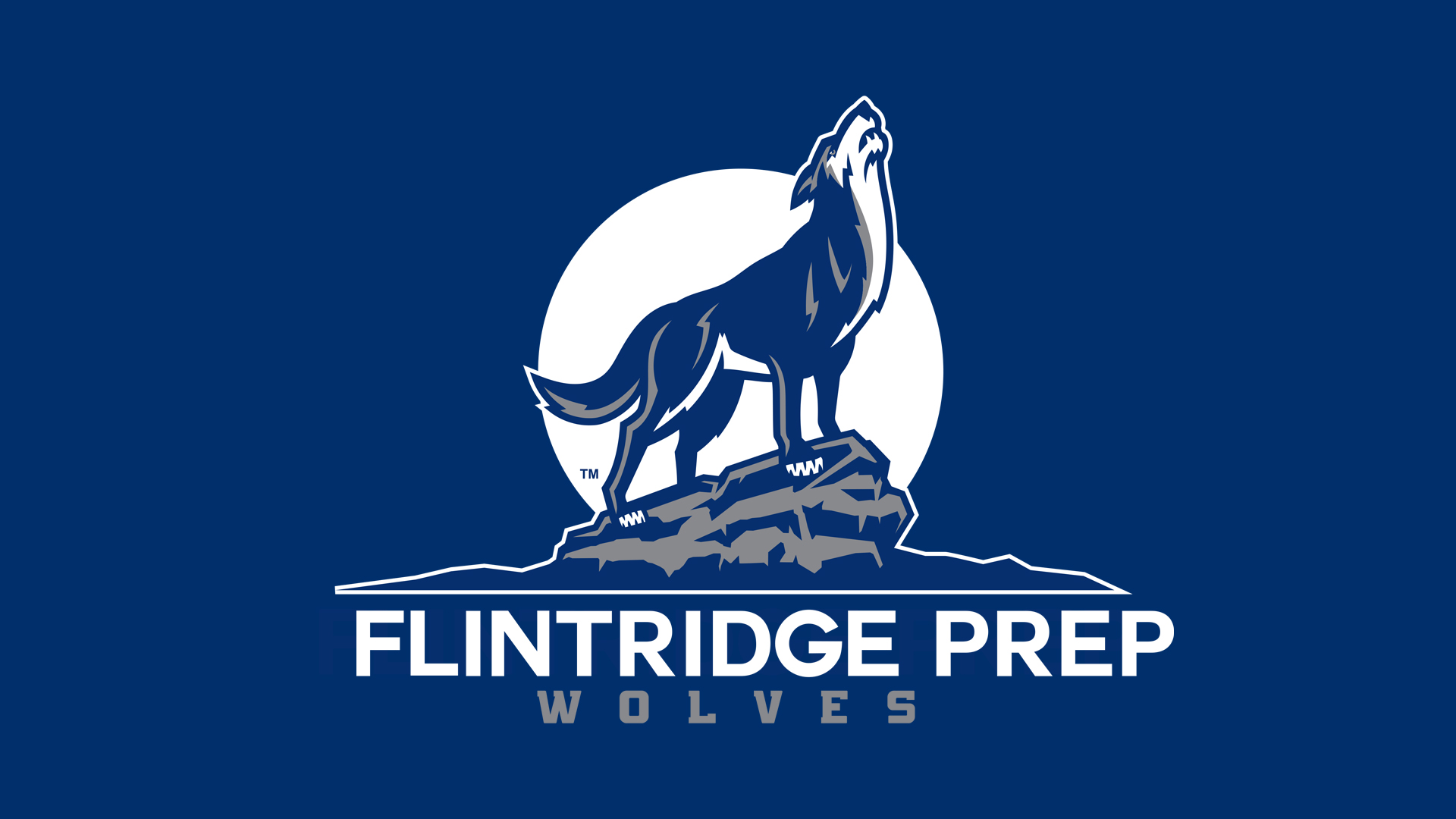 Girls Basketball: Another Prep League game. And another victory for Flintridge Prep. The Wolves, who hadn’t played in three weeks, opened the new year with a 54-46 victory at Pasadena Poly. It is their 70th consecutive Prep League win. The Panthers, who were led by Paige Lim’s 29 points, actually held a tw0-point lead after […] 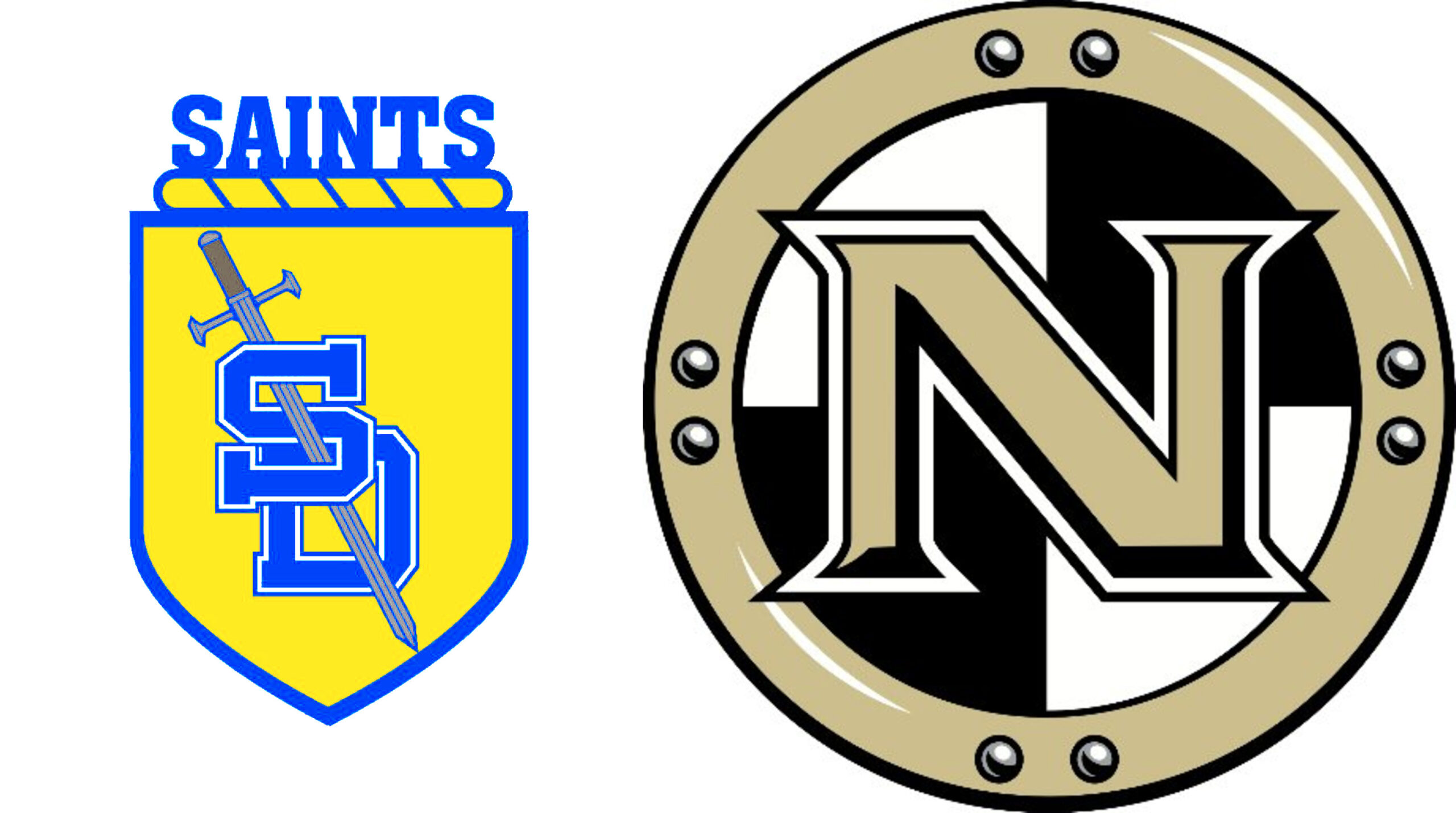 Girls Basketball: In a battle of unbeatens in Valle Vista League play, San Dimas picked up an important 50-32 victory over Northview. The Vikings struggled to get their offense going all night, but it was the second and fourth quarters that saw SDHS outscore NHS by a margin of 34-15. Jaelyn Ramos (16 points) and […] 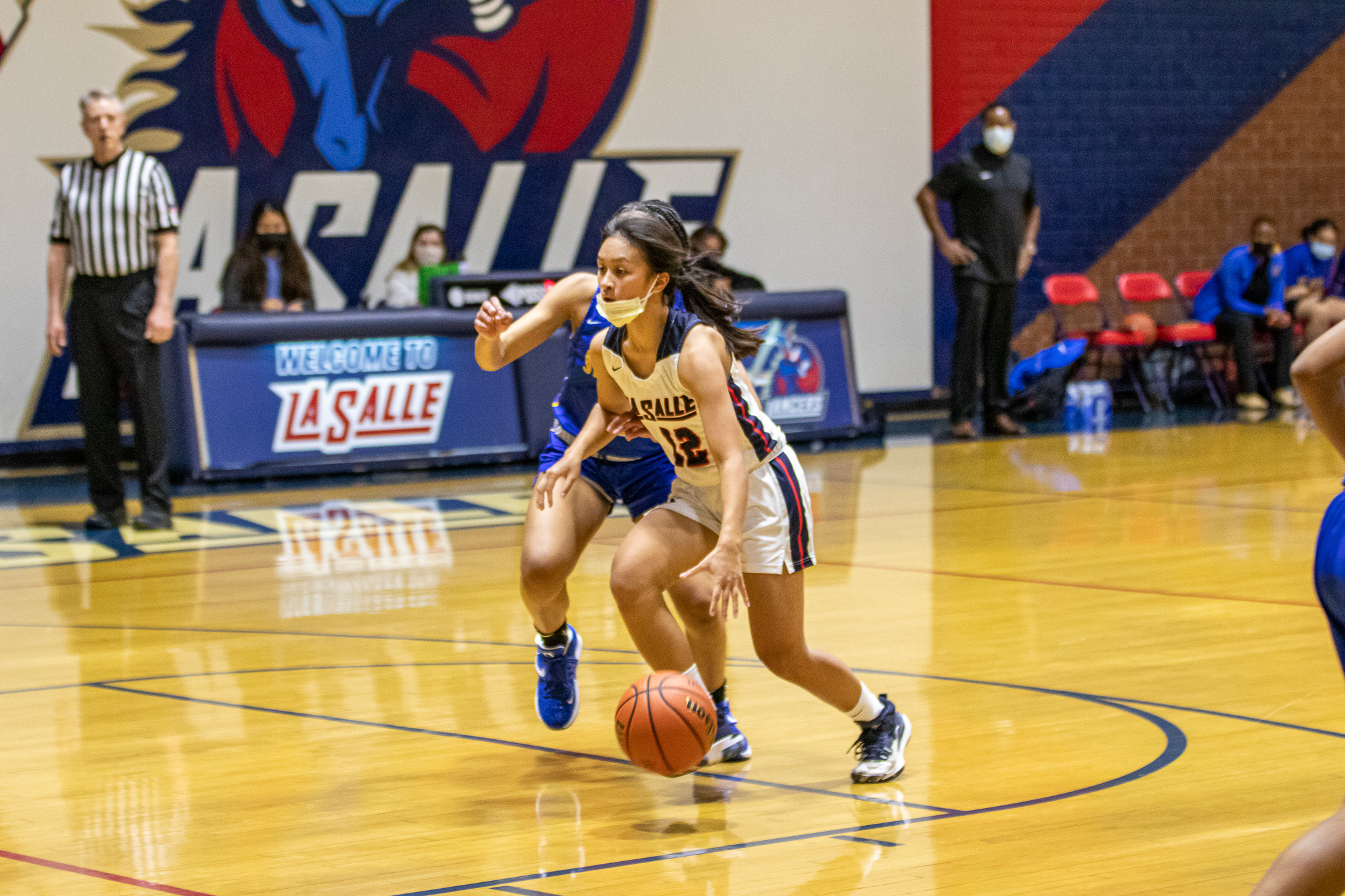 Photos by Alex Veliz Girls Basketball: La Salle won its eighth consecutive game on Thursday night. The Lancers improve to 2-0 in Camino Real League play after a 57-36 victory over St. Mary’s Academy. La Salle took a 28-12 lead into the half. Kaden Cortes led the way with 20 points. The freshman scored 12 […] 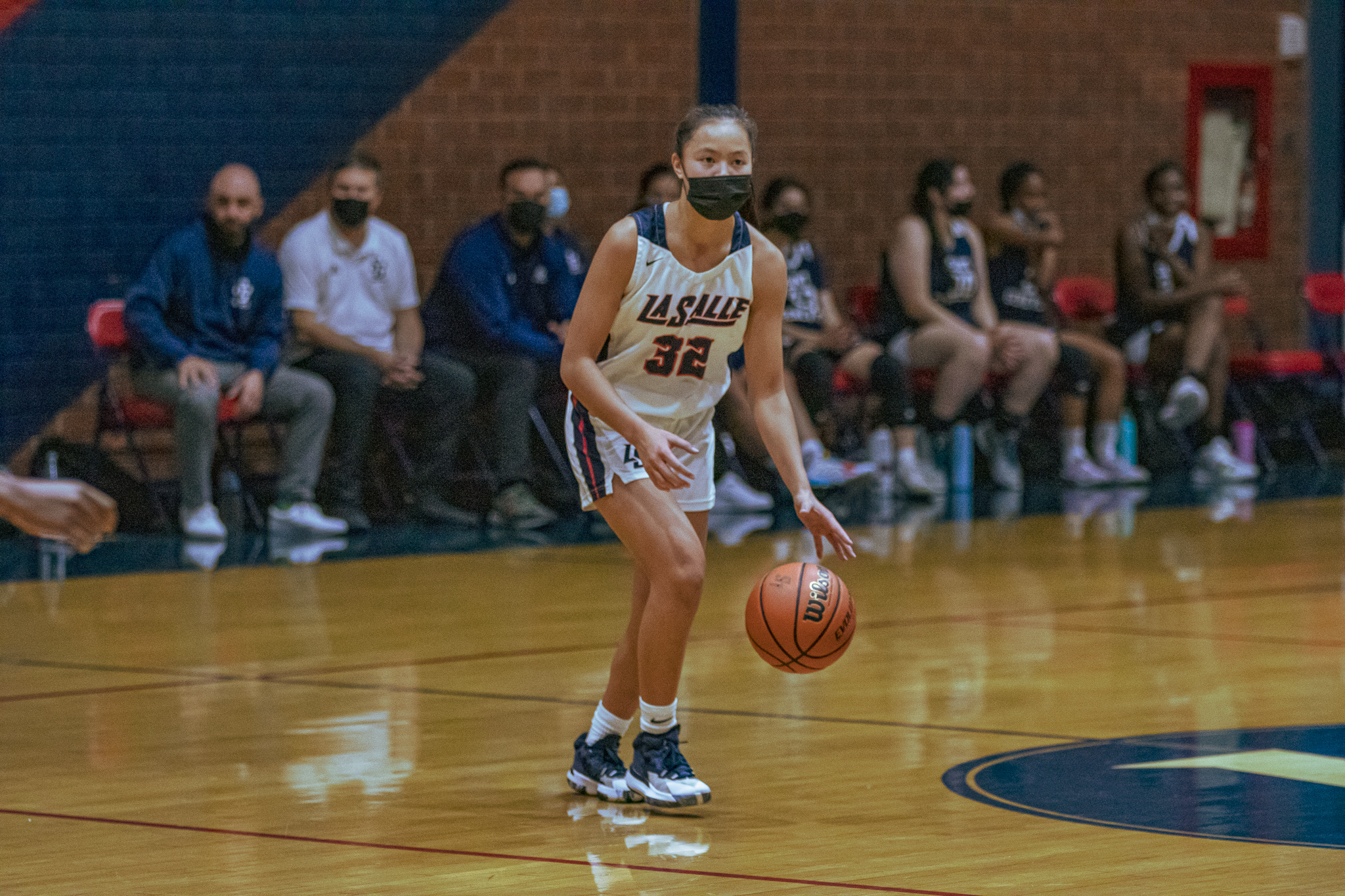 Girls Basketball: What a finish for the Bonita High School girls basketball program. The Bearcats trailed Glendora by seven points with two minutes to play in Tuesday’s Palomares League road game. Bonita, though, outscored GHS, 16-2, over the final two minutes of regulation and overtime, and defeated the Tartans, 45-38, and improved to 2-0 in […]

Girls Basketball: It had been 16 days since La Salle had last played a game. And on Saturday, the Lancers dressed just five players, because of injuries and the Covid protocol. But La Salle would not falter, defeating Newbury Park, 44-22. The Lancers improved to 14-2. Avery Ward tied for a game-high in points (12), […] 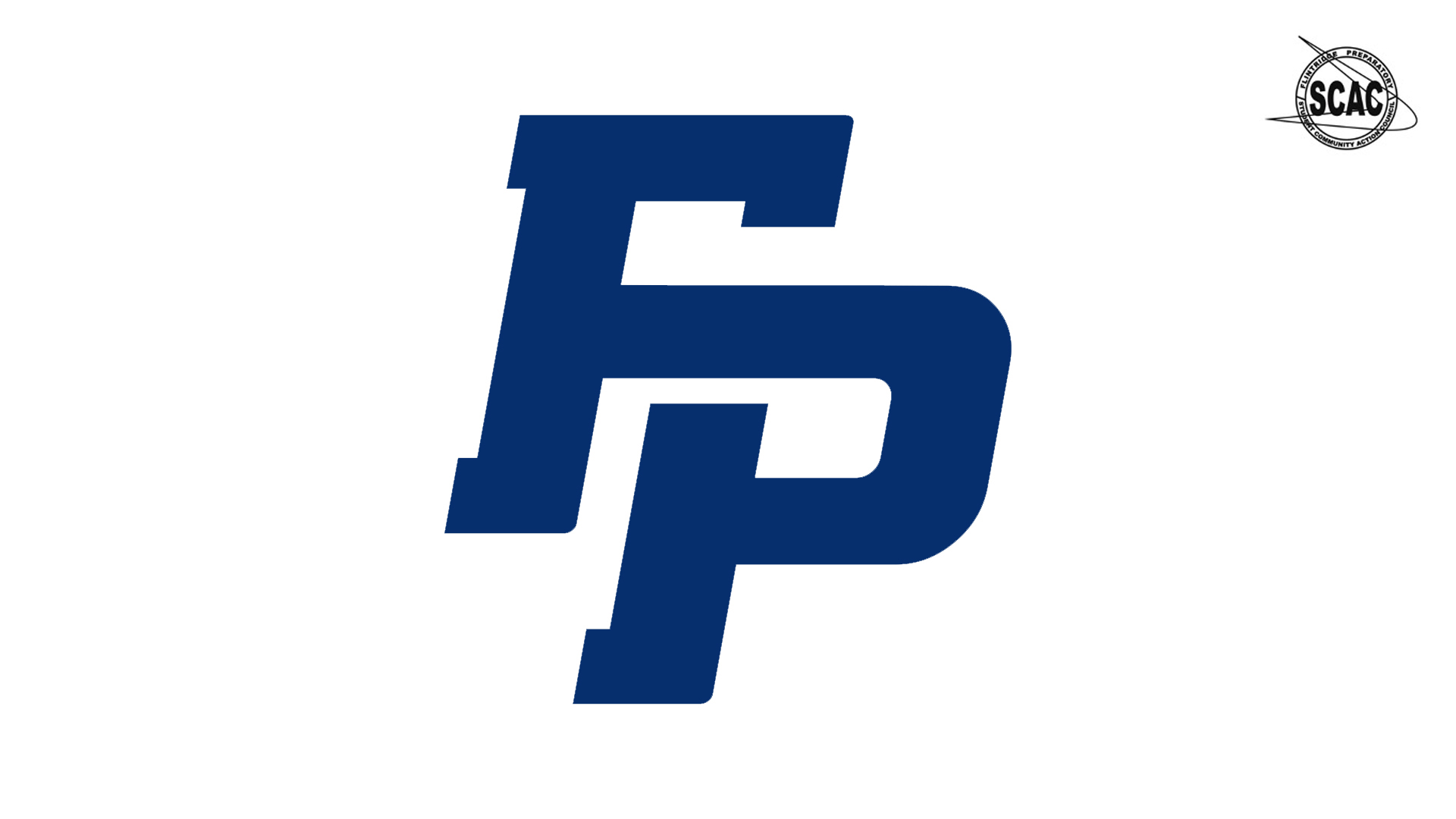 Girls Basketball: Flintridge Prep opened La Canada Tournament play with a 55-34 victory over Glendale. The Wolves had just three players score in Monday’s victory, but it was more than enough to stifle the Nitros. Ashley Chea led the way with 3o points and 12 rebounds. Maddie Chiu had a big night with 21 points […]

Girls Basketball: After nine days off, GHS was back on the basketball court on Monday afternoon. The Tartans jumped on Don Lugo early and claimed a 57-34 victory in the first round of the Glendora Tournament. Rylie Anderson led GHS with 20 points. Brianna Gomez added 12 points in the Tartans’ victory. Maliyah Alvarez led […] 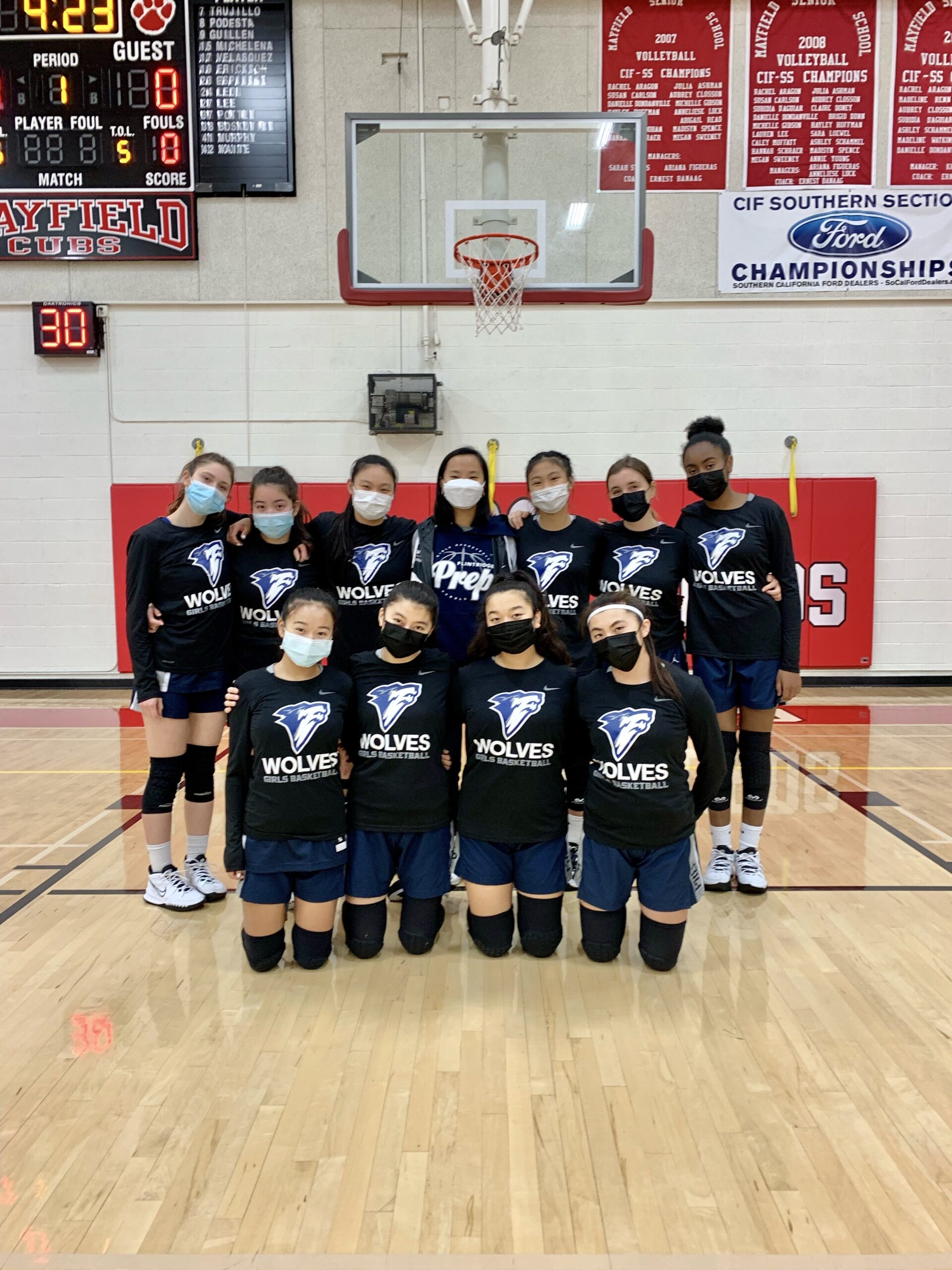 Girls Basketball: Marshall Fundamental had just eight points at halftime in Monday’s Mission Valley League opener with Arroyo. The Eagles, though, used a 15-4, third-quarter run, and picked up a 32-20 victory over the Knights. Kaitlan Sakuma had a game-high 16 points in the win. Aalijah Jones and Destiny Ihiaso contributed five points each. Ava […] 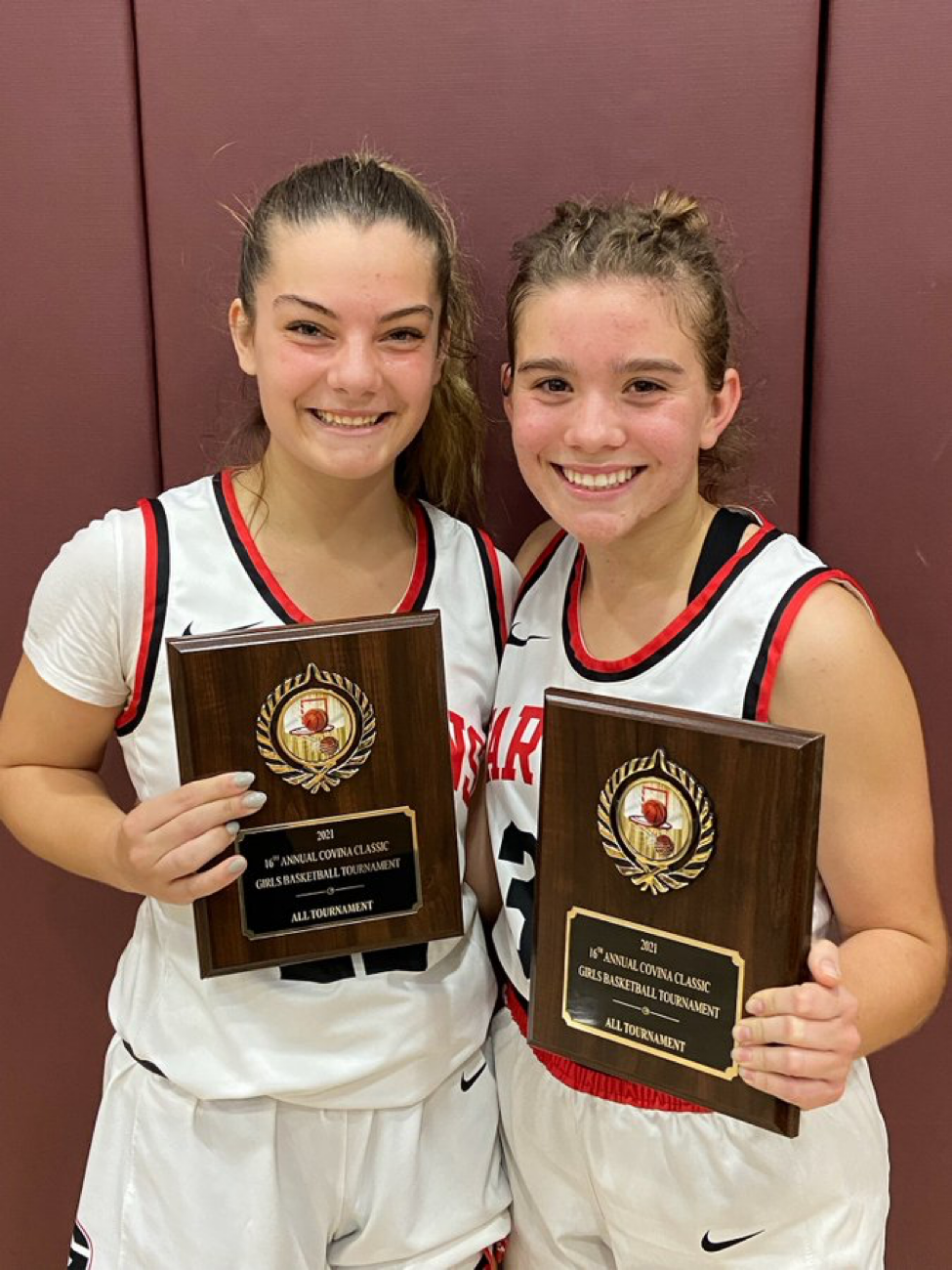 Pictured L-R Hailey Schaffer & Rylie Anderson Girls Basketball: After a 69-59 loss to the eventual champs from Summit in Friday’s semifinal round of the Covina High School Basketball Tournament, Glendora and Covina faced off Saturday night in the third-place game. GHS defeated the Colts, 38-31, to claim third place. Kennedy Herrmann led the way […]

Girls Basketball: Flintridge Prep won its 68th consecutive Prep League basketball game on Friday. And per usual, it wasn’t competitive. The Wolves had a 27-0 lead after the first quarter and went on to defeat the Tigers, 67-26. Ashley Chea outscored Westridge with 37 points. And Maddie Chiu finished with 20 points in the win. […]