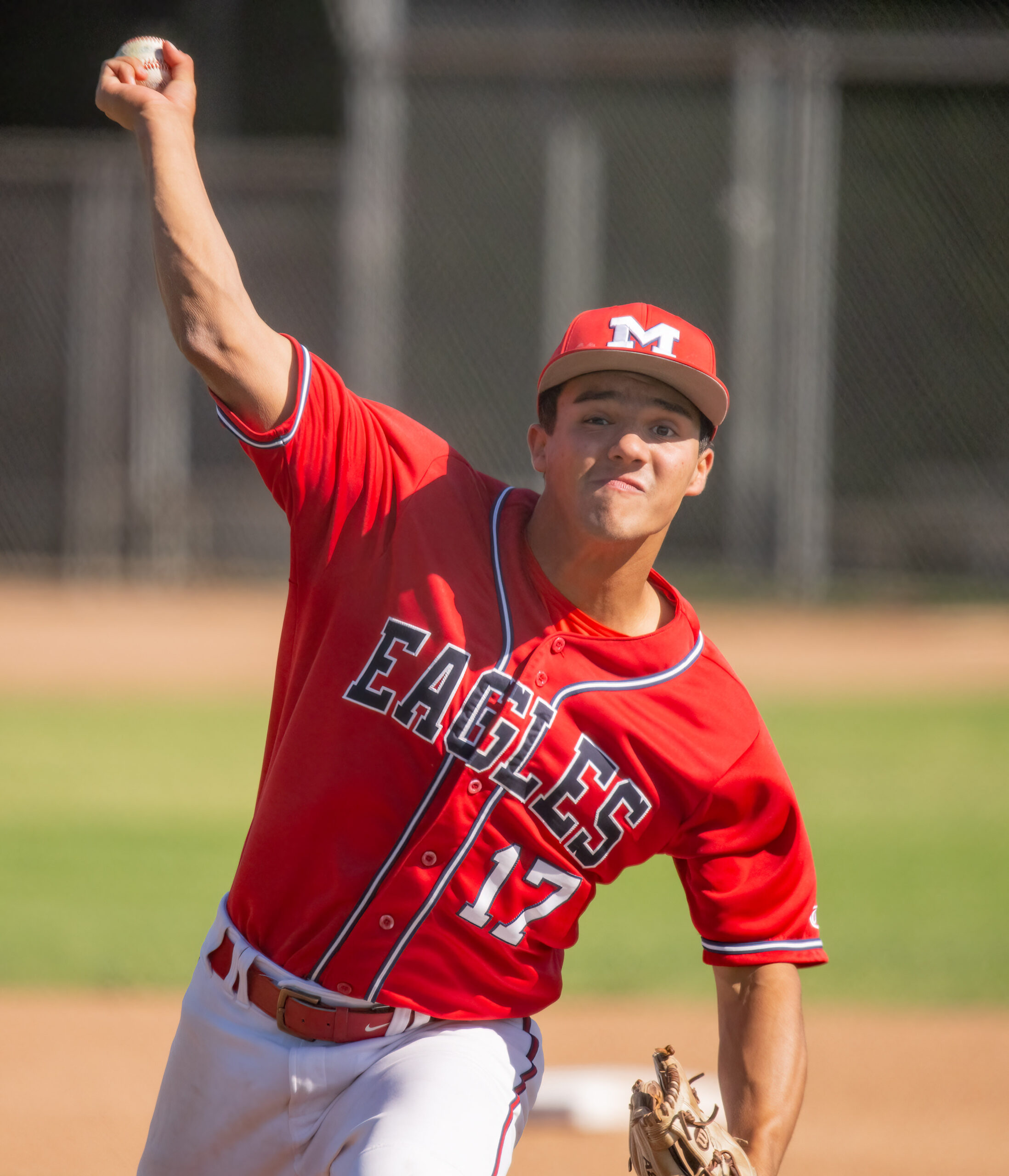 The baseball career of Marshall Fundamental senior Travis Delgado could best be described by a Vanessa Williams song, because the Eagles’ pitcher/slugger is saving his best for last.

Delgado has a 2.31 ERA, and a better than three-to-one strikeout-to-walk ratio.

While at Marshall, Delgado and his boys have an overall record of 55-18-2.

And keep in mind, COVID knocked out the 2020 MVL schedule, or a third title would have been likely.

In the postseason, the Eagles are 5-2, and during his freshman season, Marshall earned a spot in the CIF-SS Division 7 title game.

Delgado’s pitching numbers are impressive enough, but that’s only half of what he contributes to the program.

Delgado would be the first to tell you that every member of the program played a vital role in winning a second consecutive MVL championship, as well as a 2022 record of 18-4 overall and 10-2 in league.

Nick Chew, Devan Kelly, Wes Pendleton, Sam Karp, Conrad Hunziker, Jacob Hernandez, Andrew Quijada and so many others have been invaluable to coach Joe Federico and the program’s success.

What makes Delgado such a special talent isn’t just his God-given skills, his success on the mound and at the plate, or his ability to clutch up in the game’s biggest moments, it’s also his character, work ethic, priorities and intellect.

Delgado puts his education above everything else and that’s not just talk.

In spite of having more wins and strikeouts than anyone in the area, not to mention all he does with his bat, Travis Delgado is walking away from the game of baseball.

With thanks to his 4.0 GPA, all he contributes to the community and on campus, Delgado earned a Posse Scholarship and will attend the University of Wisconsin in the fall.

Unfortunately, the Badgers don’t have a baseball program, but he’s more than excited to take his education to the next level and prepare himself for a very bright future.

“Walking away from baseball is one of the hardest decisions I ever had to make,” he said. “I’ve been playing this game my whole life and I’m not sure what I will do without it next year. But at the same time, going to Wisconsin is a dream come true and is one of my dream colleges. This was an opportunity that I just couldn’t pass up. I hope I can play on the club team with people who love the game as much as me.”

If you wonder how this young man is so mature at 18, it’s pretty simple.

Delgado credits his parents, Karen and Stephen, with raising their three children (Travis, Caleb & Alexis) to prioritize what really matters, to work their butts off, and that a good education is a huge key to a happy and successful life. 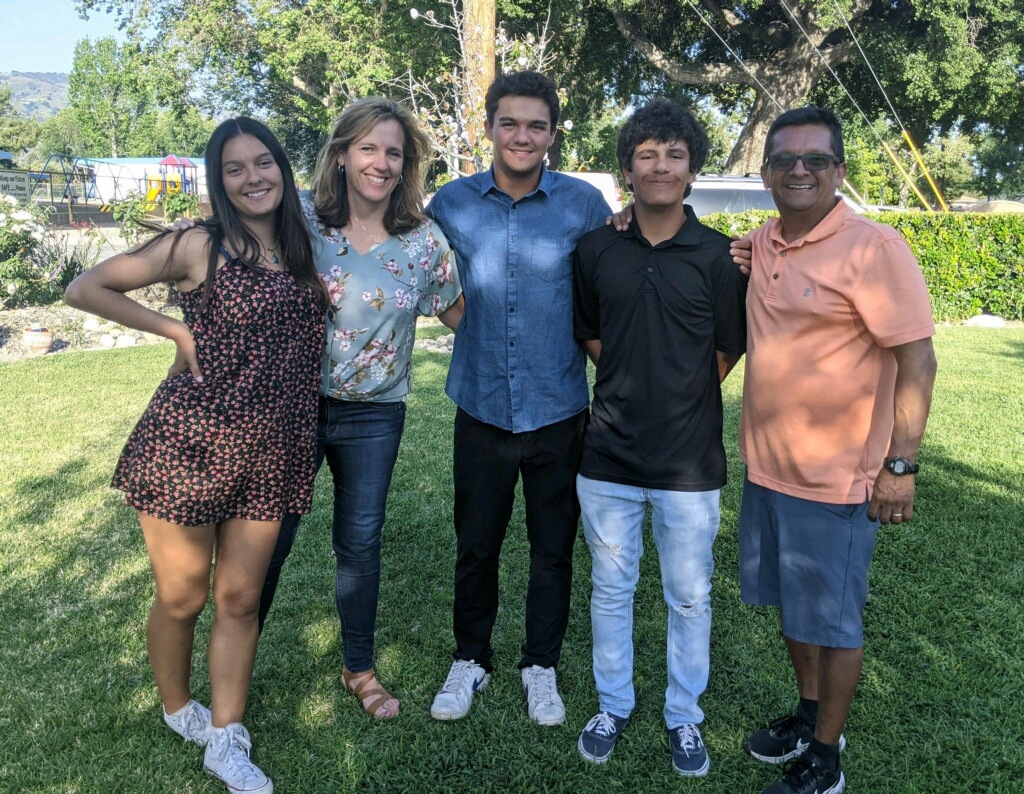 Travis never half-asses anything, including baseball, and that’s the reason he’s gotten better each season.

From 2018 to now, Delgado has improved his velocity by 12 mph, and he’s even taken on the role of leader.

His teammates want him on the mound in the game’s biggest moments and he remains one of Marshall’s most dangerous hitters as well.

What has to make the school and baseball program happy and appreciative of, is the fact that Delgado and his buddies got together during their eighth-grade year and decided they wanted to go to Marshall and make Eagles’ baseball both successful and respected.

And they accomplished both, as Marshall has won at a 75-percent clip with Travis Delgado in their lineup.

His teammate, Nick Chew, put it this way: “Travis is the guy we want on the mound in the game’s biggest moments, because he is always consistent and he’s a great leader.”

Marshall will host Malibu on Friday in the first round of the CIF-SS Division 5 playoffs.

Lastly, I asked Delgado to answer the following:  how has your game and role evolved over the last four years? Who did you look up to when you became a member of the program and how do you hope your younger teammates remember you?

Said Travis Delgado: “Over the last four years, my game has evolved just from continuous practice. Around my freshman year, I started lifting lightly and this allowed me to get stronger so that I can hit the ball further and throw harder. I’ve also worked with pitching coaches to help me improve on my secondary pitches. Over my four years, my role expanded from a role player to team captain. During my freshman year, I was the new guy just trying to do my part and starting at third base. I didn’t pitch much, because we had two guys in front of me who were really good and had like 1.50 ERA’s that season. Towards the end of my freshman season, I hit a walk-off homerun and ever since then it felt like my expectations had increased offensively. I became the number two pitcher during my sophomore year in our rotation and it’s unfortunate that COVID-19 cut our season short, because that was going to be our best team ever. I’ve always had great older teammates, who took me under their wing, and now that I’m a senior, I realize I am the leader the younger players look up to, as I once looked up to my older teammates.

When I was younger, I looked up to Alex Nava, Thomas Arnst, John Ward, and Diego Zambrano. This is because they were the older cool kids, but they treated me as if I was one of them. This helped me build confidence in my abilities and they saw that I wanted to win just as bad as they did, so I gained their respect and they gave me tips to improve my game. Even though they’ve graduated, we are all still in touch to this day. When my younger teammates think of me, I hope they remember me for more than my baseball skills. I hope they remember me for my character and being nice and funny. I also want them to remember that when they mess up in a game or practice, it’s ok, because I mess up all the time too. I tell them it’s how you deal with mistakes that makes you a better. I would want my teammates, current and past, to know that I am thankful for them. They have made this the best four years of my life and going to school everyday knowing I’m going to see my boys at practice, there is no greater feeling. Also I want to thank them for teaching me lessons and making me the person I am today. I may have got the scholarship, but it would not have been possible at all without any of my teammates help.”

Marshall Fundamental coach, Joe Federico: “When I met Travis four years ago, he had a couple goals: #1. Become one of the top baseball players in the area. #2. Getting a Posse Scholarship while he attended Marshall. Three years later, he was voted league MVP and this year he earned a full-ride, four-year scholarship to University of Wisconsin. He is super competitive in everything he does, especially baseball. For example, he was pitching a big game this year (he has pitched all of our big games the last three years) and we could see he was getting tired and losing his “good stuff”. I told him we were going to take him out, and he said “no way, you’re not taking me out, I got this”. We left him in and he reached down and finished the game. We won 2-1. This wasn’t unusual, it’s just the kind of competitor he is.
He immediately stepped in as a freshman and became our starting third baseman and our #3 starting pitcher. By the end of his freshman year, he was as good, if not better than our #1 and #2 starting pitchers. As I look back, I probably should have started him in our CIF championship game. Travis is in charge of grooming the third base area after games. For the past four years after he pitches his butt off, he is the first guy on his job, not grooming the mound, but grooming the third base area. No questions asked, no complaints, just goes and does his job.”

Marshall Fundamental junior, Sam Karp: “Travis has evolved as an athlete and as a leader. He has grown into the captain position and boosts our team on and off of the field. In his earlier days of high school, baseball he let his play on the field lead the way, but now he’s learned to use his voice as well. He continuously pushes the younger players to get better and value the time in high school that he once had. The senior players were all very fortunate to have leaders like this when we were coming up, and now he has taken that role beautifully.
Travis thrives where our team tends to lack, and that’s on the mound. We are a fairly sturdy and powerful hitting team, but what he does on the mound for us cannot be replicated. It’s what allows our ship to be afloat. Travis and I give each other tough love. We always have and probably always will. We sometimes clash on and off the field about who we are and what we are doing as a team or as individuals, but I still love him like a brother. Our competitive friendship is what pushes us to become two of the greatest players our school (or league) has ever seen. I respect his grit. Sometimes he’s shy and quiet, or maybe even in the shadows, but he is always working to get better every day. He does this weird thing where he tells himself (out loud where we can all hear him) how bad of a player he is and a disappointment, just to then use that (self) hate as motivation and drive to show how great he truly is. It’s weird but I respect it, as long as he doesn’t say it about me.”

Marshall Fundamental teammate & brother, Caleb Delgado: “Travis has brought a winning culture to Marshall baseball. He has never had a losing season and in his first year made it to the CIF championship. Travis has always been the ace my two years on the team. He’s the guy I want to have on the mound every game and especially in big games . He is a great teammate, but I think he has to be nice to me because I’m his brother. I respect that he is a leader. He brings us all up and when he’s out on the field, we play better. He has grown as a leader over the years, but now he is the captain of a very good team. Playing with my brother has been fun. We used to always talk about us playing together when we were younger. I have enjoyed the high and the lows as his teammate. When we are on the field, we are not brothers, we are teammates and he may forget that because I do get most of his anger when he is mad at the team. But I could not have dreamed for anything better than playing on the same team as my brother.”