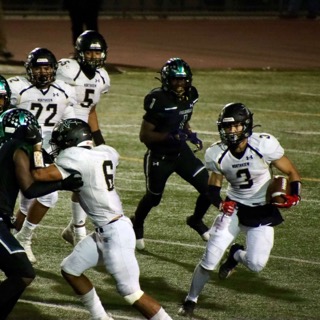 But that doesn’t make it any less true.

And Northview’s defense played a huge role in the Vikings finding itself just one win away from a potential CIF-SS Division 10 title.

On Friday, Northview made the 79-mile trip to face a Palmdale program that had just throttled Covina, 58-13, in last week’s quarterfinal round.

The Vikings defense, however, held the Falcons to 26 points under their weekly scoring average, and went on to claim a 28-14 victory.

The consistent NHS offense tallied seven points in each of the four quarters, while Palmdale scored one TD in the second and one in the third.

Along with a masterful defensive effort, a lot of credit has to go to Northview’s offensive line and running backs.

Northview threw the ball just six times for 56 yards and one TD.

The rushing attack, though, racked up 288 yards on 47 carries, and three TD’s.

Erik Saiz rushed for 40 yards on six carries, and that included one rushing TD.

The Vikings have now outscored Garden Grove, Kaiser and Palmdale in this postseason by a combined margin of 100-41.

Up next: Northview will host St. Anthony of Long Beach on Friday at Covina District Field.

Editors Note: I apologize for the delay in publishing this story. We were waiting for a photo to go with a recap of this importance.