Two of the best players in San Dimas baseball history were selected in this week’s 2022 MLB draft.

In the fifth round, the New York Mets selected the USC shortstop as the 149th pick.

While his senior season in 2020 was limited to just eight games (COVID-19), the Saints record during Smith’s four years was 76-23 overall, 30-2 in league, and SDHS claimed three Valle Vista League championships.

Smith started 52 games this season for Southern Cal, which was one back of Rhylan Thomas for the team lead.

D’Andre Smith is an intelligent, humble and appreciative young man with a lot of character.

And whether you love or hate San Dimas and/or USC, he’s someone that everyone can get behind.

I asked Smith to touch on the following topics: When do you leave and where will you be going? When did you start dreaming of becoming a pro baseball player and how did it feel hearing your name called? How did your experiences at SDHS and USC help pave the way in becoming a professional baseball player? What role did your parents play in your life and career, and what would you want your teammates and both schools to know about your time with them?

Said D’Andre Smith: “I leave tomorrow and I’ll be in Port St. Lucie Florida. Around the age of three, I started playing for my dad’s T-ball team and that’s when the dream started. My parents told me that when I was around that same age, I would watch full nine inning games on the TV and my eyes wouldn’t leave the screen. It was a surreal moment to hear my name get called and to see the looks on my parents faces, because they have sacrificed just as much or even more than I have to get to this point. My time at USC really helped me mature and I experienced a lot of adversity. And through that, I came out a much stronger player, and a better person.

My parents (Sharon and Diego) have been my biggest supporters and they have played the most important role in all of this. The only time my dad wasn’t able to make one of my games was this year, because we were on the road. My parents taught me how to have a work ethic and I saw it firsthand from them every single day. All of the hours my dad and I spent at the field and in the cages have gotten me to this point, but it will be all of the lessons he has taught me that will get me to the big leagues. My mom has always been my rock and her emotional support has gotten me to where I am today. Her support ranges from taking me to practice and washing my uniform for the next game to telling me everything will be okay when I have a bad game. God has really blessed me and my family. I wouldn’t be here without them.” 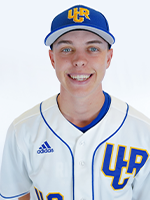 Zach Jacobs owns most of the SDHS pitching records.

And while the UC Riverside baseball program didn’t see much success over the last three years (32-88), including a shortened 2020 season, Jacobs battled his ass off.

The UCR offense averaged under three runs per game since 2020, which allowed little room for error for the Highlanders pitching staff.

Jacobs got injured early in 2022 and only threw eight innings, before sitting out the rest of the season, but he’s back and better than ever.

The Cleveland Guardians made Jacobs the 541st pick in the 18th round.

That was good for four (outright or shared) Valle Vista League championships.

Just like Smith, Zach Jacobs has loving and supportive parents, who have helped guide their son into manhood, and it’s allowed him to reach a level in baseball that 99-percent of us never get to experience.

And don’t let his lean frame and boyish face fool you, this kid morphs into assassin mode when he’s on the mound.

I asked Jacobs to answer the same questions that Smith touched on above.

Said Zach Jacobs: “I leave Sunday to go to Goodyear, Arizona. I started dreaming about playing professional baseball when I was seven years old. That’s when D’Andre and I started playing together. I was shocked when I got my name called, because I didn’t play this season and I didn’t think any team wanted someone that was injured. So it was shocking to hear my name called. I’m just grateful that someone is going to give me a chance to get my foot in the door. My time at SDHS was really important, because that’s where I really developed as a young man. Coach Chip and Coach Regan helped me learn the mechanical side of pitching, as well as pitch tunneling and sequencing. Also at SDHS, the coaches helped me up my velocity from 72 as a freshman to 85-89 when I left.

My first year at UCR, Troy Percival really helped me with fine tuning my mechanics and improving my off-speed pitches. Mike Burns came in after Percival stepped down the first year and we instantly had a connection on and off the field. He helped me understand who I am as a pitcher and how I’m going to tally the strikeouts, because I’ve always been a weak contact pitcher. I would also add that playing in Cape Cod between my sophomore and junior year of baseball also helped find out who I am as a pitcher, and really understand my pitching arsenal. I credit Coach Tom Vessella (Hillsdale College head coach) for helping with fine tuning my mechanics and also helping me understand myself while I was up there. I owe my parents (Brian and Candyce Jacobs) for everything good in my life. I want them to know that I wouldn’t be where I am today without them. They always put me first in everything and I am extremely grateful for them. They give me constant support and I can’t wait for them to be in a suite at Progressive Field.”