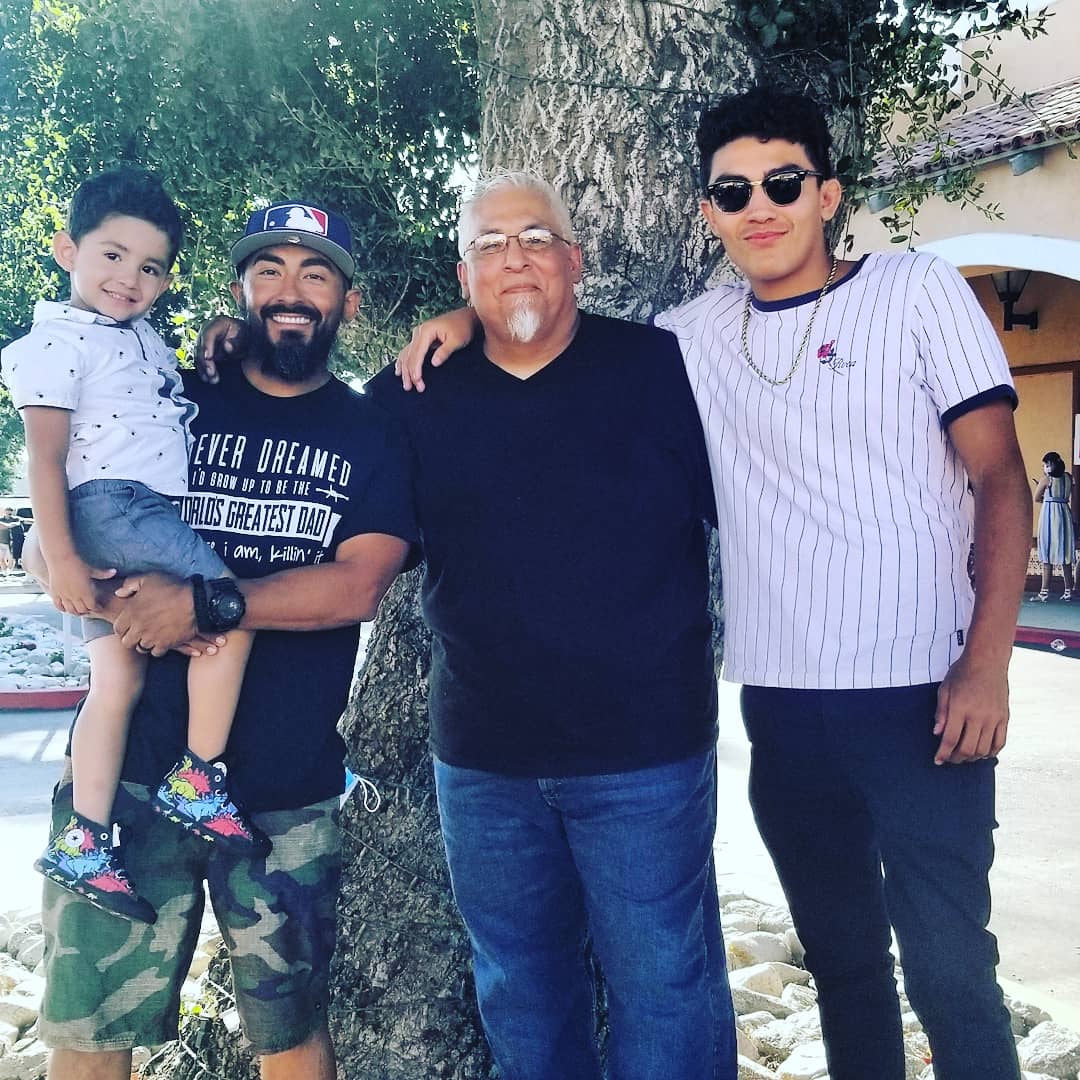 Northview junior Nate Cruz and his dad, Armando Cruz Sr., weren’t just father and son, they were also the best of friends.

And they always seemed to find time for the other.

The Vikings’ wrestlers typically eat together in Coach David Ochoa’s room at Northview, and in spite of the fact that Nate lived with his hero, every day at lunch either Armando called Nate or vice versa.

At the end of each call, Cruz told his father that he loved him.

His coaches, teammates and siblings described them as ‘inseparable,’ and Nate said, “he was my everything.”

Cruz, his father and big brother, Armando Jr., tested positive for COVID not long before the Christmas break.

Nate described the scenario: “I woke up at 5 a.m. one morning and I was burning up,” Cruz said. “I checked my temperature, and I had a 102-degree fever. I had this really funky smell and food tasted bland. My dad seemed to be doing well, but one day he started feeling crappy and said he needed to get to the hospital.”

Through the first couple of days, Mr. Cruz seemed to be progressing, but then he took a sharp turn for the worse, and he had to intubated, because whenever he ate or tried to talk, his oxygen level would drop to 70-percent.

Nate, Armando Jr and his wife, Cynthia, texted Mr. Cruz throughout his weeklong stay at the hospital, and in the hopes of lifting his spirits, because they knew how important a positive attitude was in battling COVID.

Cynthia, who is a nurse, checked in on her father-in-law’s status regularly, and she wouldn’t take generic answers to her questions.

She demanded information, including vital signs and got them.

As motivation, Cynthia sent photos of Armando’s two grandkids, Jayden, who is five, and his five-month-old brother, Maximus.

“We wanted him to know how much we loved him and needed him,” Cynthia said. “It really seemed to lift his spirits, because he texted back how perfect they are and how much he couldn’t wait to see them again.”

His heart stopped at one point, but Mr. Cruz was administered CPR, and he seemed to have bounced back.

Sadly, two hours later, Armando Cruz passed away at the age of 55.

Nate recalls how he found out.

“I was asleep, and my sister-in-law had texted a couple of times, but I didn’t hear them,” Nate said. “But then my sister called at four in the morning and she was crying, so I knew something bad had happened. She said dad isn’t going to make it, and that woke me up in a hurry.”

Nate Cruz lost his father on Christmas Eve, which was almost exactly two years to the day that his mom passed away.

To say he and the family were devastated would be putting it mildly.

“One of the first things Nate said after our dad died was “he’s my motivation for everything. I don’t know how I’m going to be able to move forward without him,” Armando Jr., 36, said. “They did everything together and were even closer than people thought.”

One of Nate’s pressing issues, besides the obvious heartbreak of losing his dad, was finding a place to live.

That concern got answered quickly when his brother Armando and his wife invited not only Nate to live with them, but Nate’s friend Abraham Valdez, who after his time in foster care had run out, had to sleep in a car.

Armando and Cynthia are going to have construction done, so the garage will be a room for Nate and Abraham.

“When I found out I could live with them, so much weight was lifted off my shoulders, and for them to want to make Abraham part of our family means everything.”

While Armando’s actions are generous and loving, it shouldn’t surprise anyone, because this is exactly the way Mr. Cruz raised his three sons (Armando, Kevin and Nate), and his daughter, Erika.

According to Nate, Armando and Cynthia, Mr. Cruz was selfless, loving and always made the effort to bring people together.

“He always taught us to respect everyone, and always said to be kind to each other,” Cynthia said. “He called all the time to see if we needed anything, how we were doing and if we needed him to babysit our two kids. He was such a kind and giving man. There was also no way Nate was going to be alone. Our family sticks together and that’s something that would make him so proud.”

Having done this job for 22 years, and that includes stints in the SGV, Inland Empire, Orange County and Long Beach, this reporter has never seen a school, let alone a program rally behind those in need like the Northview wrestling program.

Nate’s been bombarded (in a good way) with texts and calls from coaches, teammates, their parents and even parents in the youth program to make sure he’s OK and if the family needs anything.

And that has meant the world to the entire Cruz family.

They will be with Nate every step of the way, including their commitment to make sure he not only gets his high school diploma, but his college degree as well.

If you’re able, please consider making a donation to Nate Cruz to help pay for the funeral costs in early January, and to help Nate move forward in honor of his father’s goodness.

A gofundme account has been set up: Fundraiser by Javier Limon : Help lay mando to rest. (gofundme.com)

Way down the line of importance is that Nate Cruz is a very talented wrestler, who, two years ago, when there was an actual season, claimed Valle Vista League and CIF-SS individual championships at 145 pounds.

Cruz has been part of the program since he was approximately six, and the Vikings’ junior will wrestle at 170 pounds this year. 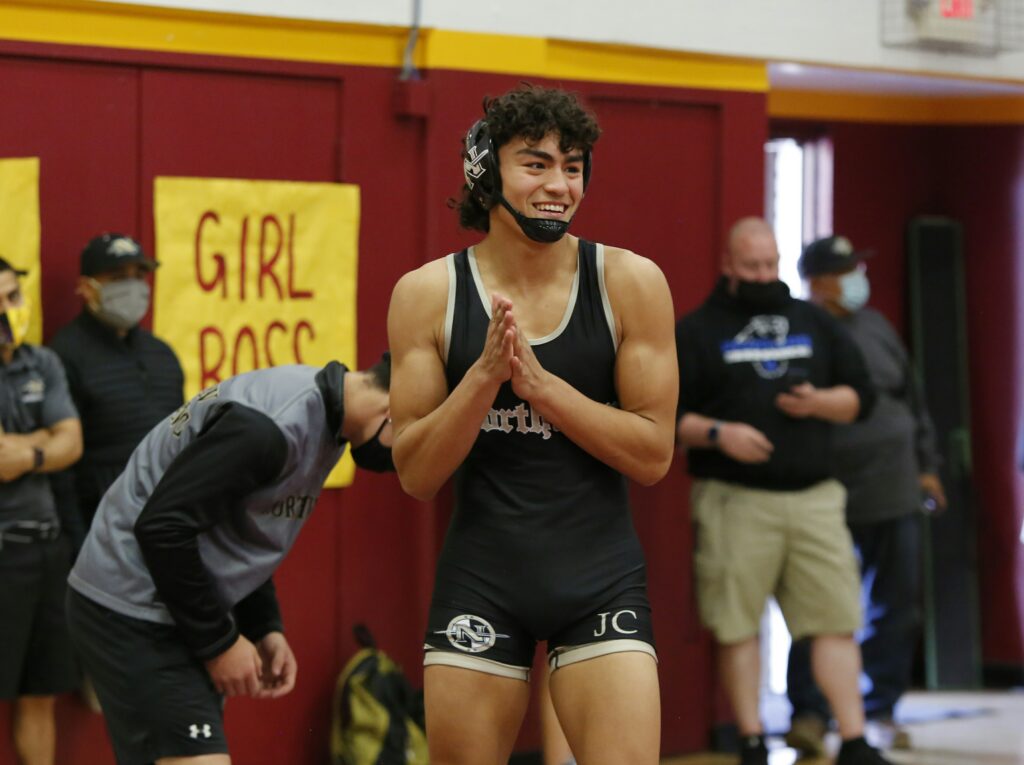 I asked Nate how he’s processed this enormous loss in his life, what makes him most proud to be the son of Armando Cruz Senior and what he’d want to tell his dad.

Said Nate Cruz: “I find myself asking God why he took both of my parents away at such a young age, and I can only figure he has big things in store for me. I am so proud to be his son. The way he raised all of us, and how he loved us is something I will always hold dear. I have gotten amazing support daily from my coaches, teammates, their parents and my friends. They check up on me every day and ask if I want to sleep over, go to dinner or just talk. What I learned most from my dad was to treat people with respect, and carry myself in a way that represented his teachings well. I will always love him and I can’t wait to see him again.”

They say the most accurate way to gauge a parent’s job in raising a son or daughter is to simply observe the way in which those kids carry themselves and the values they embrace.

It couldn’t be more clear that Armando Cruz Senior was not just a great dad, he was also a tremendous man.

Mr. Cruz, you left your four kids and two grandchildren a life’s worth of lessons that they will pay forward. You should be so proud of the job you did, and I can promise you that those around them will look after your loved one’s for years to come.

If there was one photo that best displayed the love between father and son, it’s this one: 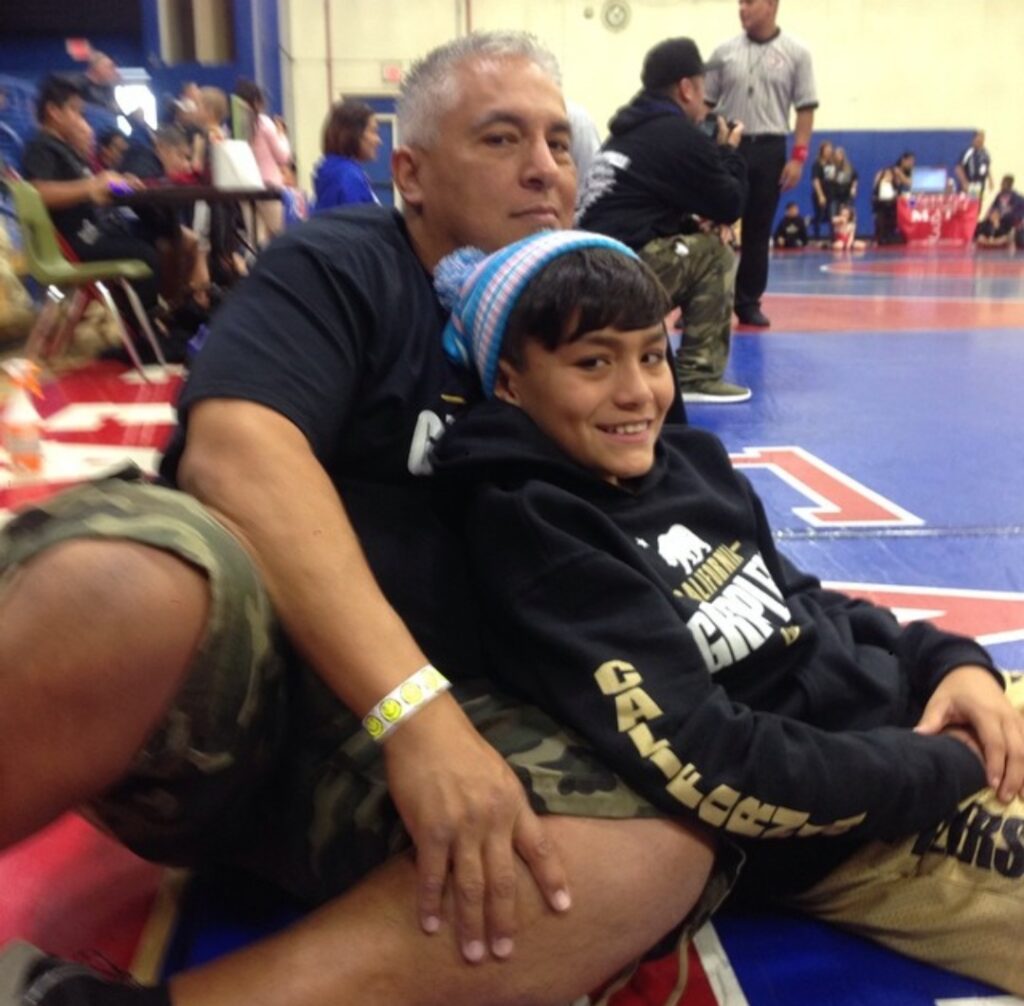 May God bless, Armando Cruz Senior, and the family he loved so much.

Northview coach, Bobby Bellamy: “Nate is an awesome young man, who is always looking out for others. He lost both his parents in the past two years. So sad. His dad didn’t miss a match. He either watched it via stream or he was there in person. Win or lose, Mando was the first person Nate called after his match. He was Nate’s biggest fan. They had a special relationship. One that most fathers wished they had with their son. He’s currently ranked 11th in the State, he won CIF as a freshman and is a team captain for our program.”

Northview coach, David Ochoa: “Nate’s dad was someone that every coach wants and needs. He was so supportive to our program and he was always there for his son. He raised Nate to be a good person first and foremost, and I know he was so proud of the way that Nate carried himself and represented his family. We are so proud of the way he represents our school and the wrestling program. We are going to see Nate through not only high school, but college as well.”

Northview senior, Adrian Limon: “Nate and his dad were extremely close. They were almost inseparable. We are a family here and we’ll constantly be there for him in whatever way he needs us. Nathan is always pushing everyone in the room to be better. He’s a great teammate and wrestler, who is strong and fast. He’s good at what he does, because he works so hard. If I were a coach, Nate is exactly the kind of kid I’d want my younger wrestlers to emulate, because he does everything the right way.

Jesse Cruz, father of the late-great, Jesse Cruz: “We know that Nate will be surrounded by people who love him and will support him in any way they can. It’s still difficult for us to describe the enormous support we received not only from the Northview community, but also from Rio Hondo College and the wrestling community. Since we have been part of Northview, there have always been those that do what they can to make sure the kid’s interests are important. We have always known that God placed them around us at a very difficult time in our lives. We can’t expect anything less for Nate and his family. The Northview family will rally around him with love and support.”