San Marino’s Koa Ruiz was born to be a wrestler.

The Titans’ sophomore began his career at age 5 and his big brother, Keanu Tom, was a star at Los Alamitos High School.

You could say this sport runs through his veins.

Ruiz, his teammates and all the top southern section competitors will be at Sonora High School for the two-day CIF Masters Meet starting on Friday.

The top nine wrestlers in each of the 14 weight classes qualifies for next week’s CIF State Championships at the Rabobank Arena in Bakersfield.

In less than two years, Ruiz has earned a pair of Rio Hondo League and CIF-SS Southern Division Individual titles. 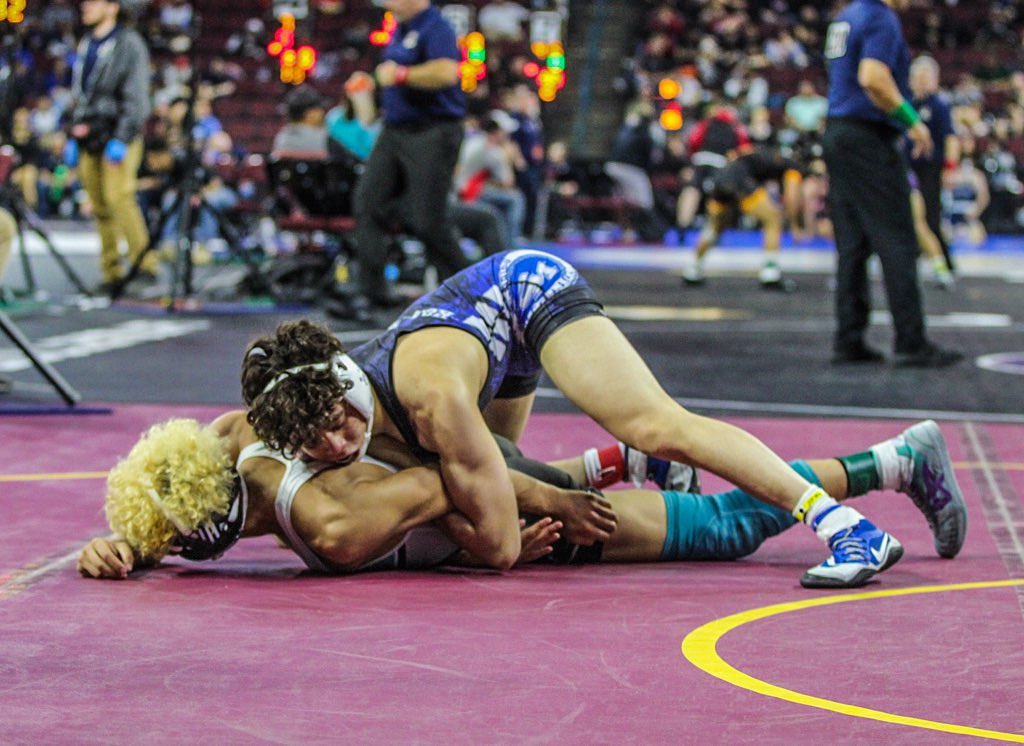 What has to make those two CIF championships mean even more is the fact that he knocked off the No. 1 seed in both title bouts.

Last year as a freshman, Ruiz narrowly qualified for state, defeating Blade Owens of Apple Valley, 6-4, in the ninth-tenth place match, where the winner goes to Bakersfield and the loser goes home.

Over his two days in Brea, Ruiz went 5-0, with four victories via pin fall and a 17-1 tech fall over Shawn Velasquez in the first round.

So, where did Ruiz get his moxie to perform his best in the biggest matches?

The credit has to begin with his own tireless work ethic, but he also has two great parents in Lana Olotoa and Ricardo Ruiz, who have set a stellar example for their children. 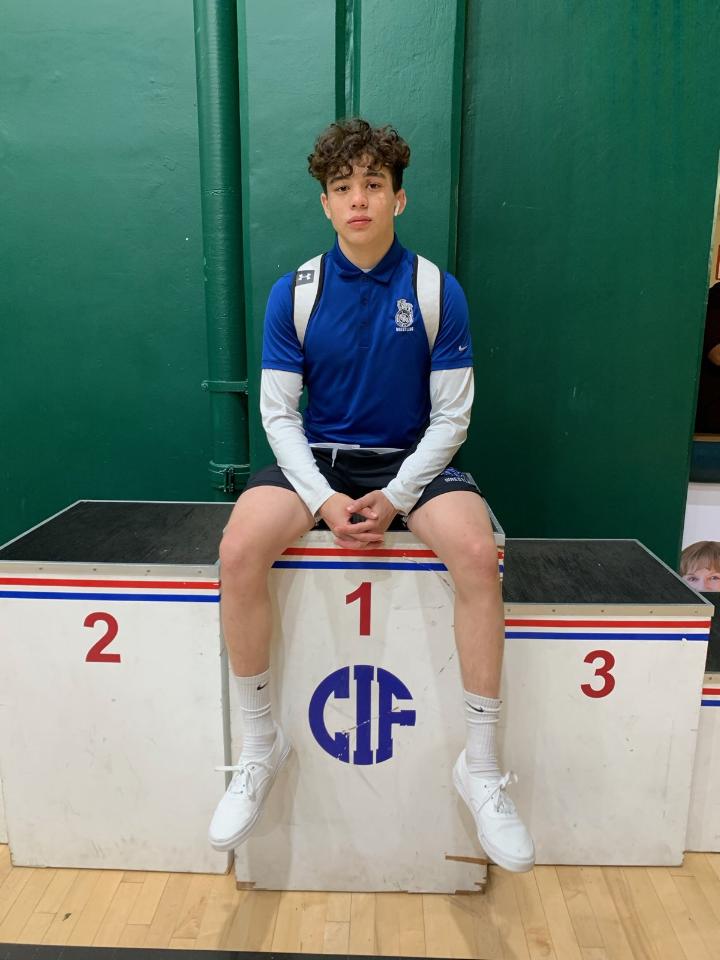 One of Koa’s most endearing traits is the fact that as much as wrestling is his life and being successful is paramount, he still values his family, friends, teammates, being a good person and excelling in the classroom even more than anything that ever has or could happen on a wrestling mat.

As mentioned earlier, his brother Keanu was a 135-pound star at Los Alamitos.

A week later, he lost in the ninth-tenth place match, so his junior year ended one win from reaching the big stage in Bakersfield.

The following year, Tom tore the ACL in his knee one month into his senior season for the Griffins, and many believed his career was over.

He went through a devastating period, both physically and psychologically.

But backing down isn’t in Keanu’s DNA, and that’s why he is so respected and loved, not to mention he’s such a solid and respectable young man.

So, two years later, after rehabbing and training his butt off, Tom won the 157-pound state title for Cerritos College and coach Donny Garriott. 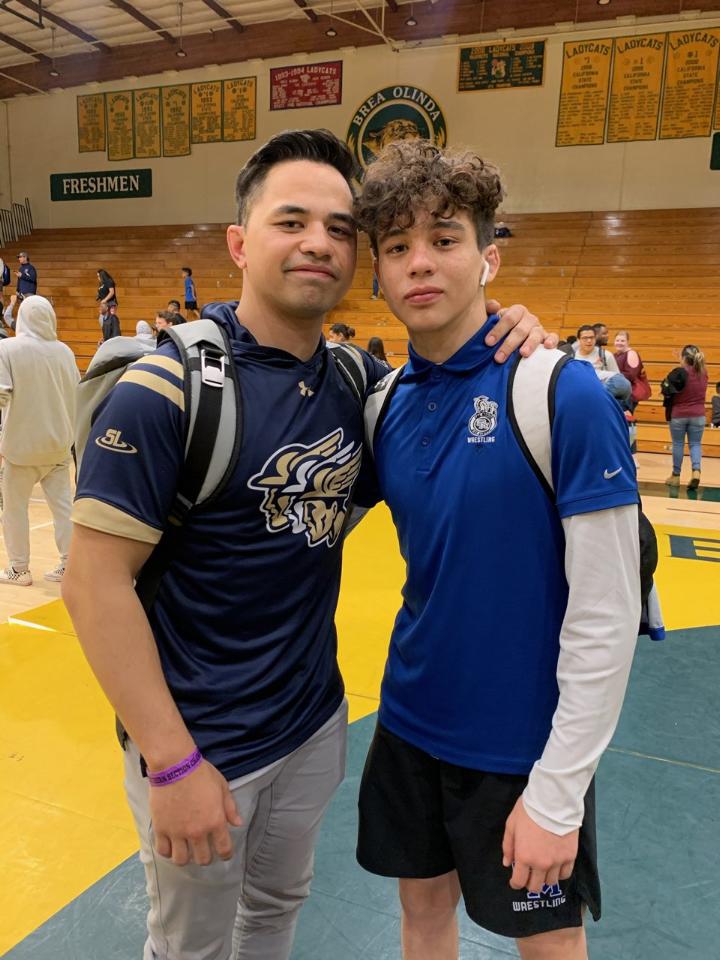 He was also a captain on that 2012 team that won Garriott and Cerritos their first ever State Championship as a program.

And don’t think for a second his little brother wasn’t paying attention.

After leaving Cerritos College, Keanu went to King University and then to Concordia University, Nebraska, where he earned a degree in Business Administration and Marketing.

One of the many things that makes Keanu special is that he genuinely cares more about the success of his little brother than anything going on in his life, and he’s done everything he could possibly do to pass along all the experiences he’s had in a sport they both love.

Koa is a wrestler because of how much he looks up to his big brother and while Keanu is 25 and Koa is 16, they’ve switched roles, because Keanu is without question his little brother’s biggest fan and he couldn’t admire, respect or love his brother more than he does.

Here’s hoping Ruiz dominates over the next two days at Masters so his parents and brother don’t get any gray hair and have to sweat out another ninth-tenth place match like last year.

And Ruiz is determined to medal in Bakersfield on February 29.

His skills, high intellect and versatility give him a very good chance to do all of the above. 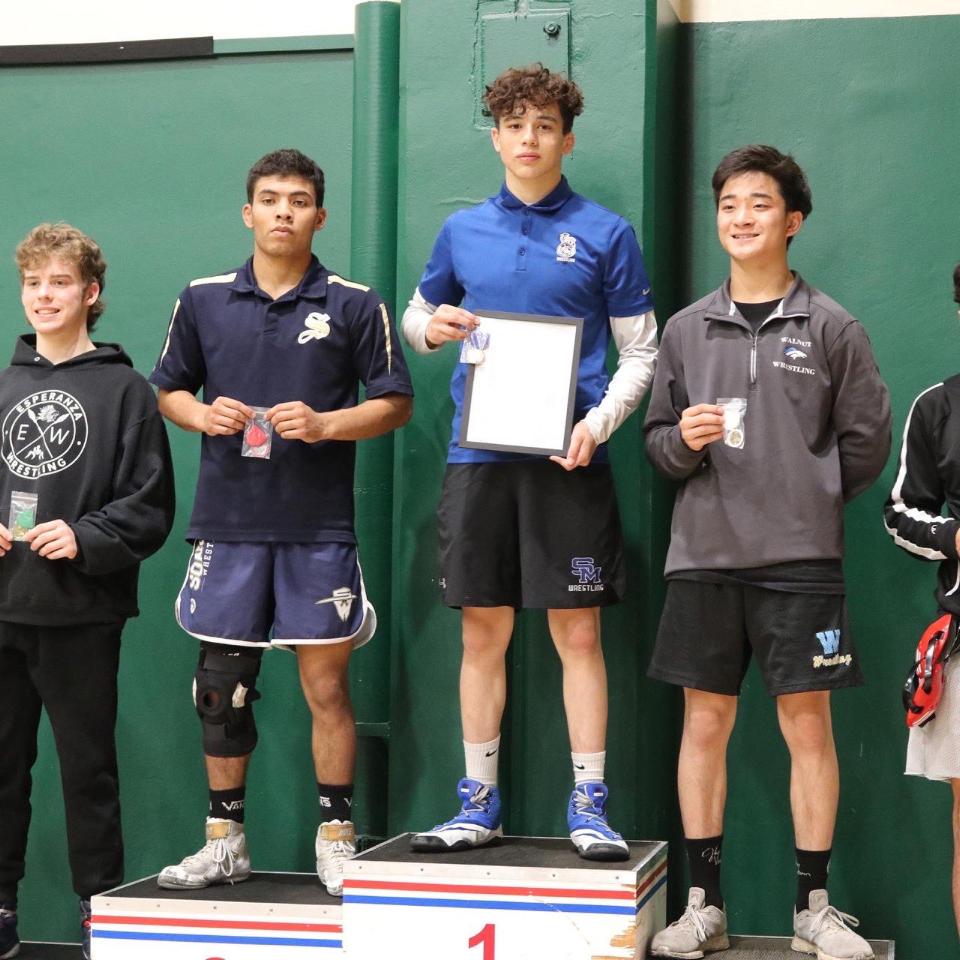 As much as Koa has shined in his prep career, he’d be the first to ask us to mention his teammates, who he credits greatly with helping his ascent in the sport, not only each week, but each match.

San Marino finished third as a team at the CIF-SS Southern Division individuals last weekend at Brea High School, behind Villa Park and Esperanza in that order.

San Marino coach Eddie Aguirre: “Koa came to San Marino as a strong youth wrestler with an intensity and skillset to be successful. Over his last two years, he has spent a considerable amount of time honing that skillset to be a top ranked wrestler in the state. He has become more focused on his craft by spending hours after each practice reviewing his technique meticulously with his coach, going over every last detail. They repeat drill after drill until each one mirrors the other, focusing on body position, pressure, hand placement, timing and execution.

Intensity is key to Koa’s success. When he’s locked in, the outside world is null and void, it’s just him and his opponent. He focuses on technique so much during and after practice that the wrestling become automatic during his matches. He is able to push the pace on his opponents with constant pressure and good position. As his matches continue, you can see his opponents fade and it looks like Koa hits another gear.

(What shortcomings have you worked on with Koa) We have really focused on his discipline. He has not strayed from the game plan we set in practice. Wrestling in a live situation is so fast paced that you can get caught reacting to your opponent, wrestling a step behind. Despite knowing countless moves, he has really shown a commitment to staying within the game plan set forth by his coaches. By sticking with the game plan, we have seen a real reduction in points allowed this season.

Koa is a valuable teammate. Prior to practice, he brings a sense of levity to the room and the pressure it brings. He loves wrestling, he was raised by a wrestling family, its in his blood; so when practice begins, you can see the switch in personas. He has really found a balance with his life, academically, socially and physically, and that is the best way to lead by example. He’s becoming someone that the other kids can really look up to, and the parents who have seen him grow up make it a point to tell me how much growth they’ve seen over the last two years.”

San Marino sophomore Koa Ruiz: “I feel like I’ve had my biggest growth this year. I’m at a great school, with hardworking coaches and hungry teammates. I’ve set so many new goals for myself and I’m focused on them. I’m working hard everyday and I don’t plan to stop. Not just with wrestling, but my education as well. I’ve found a good rhythm to balancing both. I’m trusting the process. When my arm is raised after a win, it’s not just about me, it’s a victory for the hard work all of us in this program put in.

Ever since I was younger, I’ve always looked up to Keanu. The reason I started wrestling was because I wanted to be just like him. Growing up, I saw him go through a lot of highs and lows. The lows being his injuries and the high being a State Championship and then heading off to college. He really set a high bar for me, which is why I push myself everyday. When Keanu was injured, doctors told him he should never wrestle again. But he didn’t even consider it, instead he rehabbed himself back up and eventually became a state champ. This showed me that nothing holds you back from what you want. I think most people would have given up and felt sorry for themselves, but not my bother! Now every time I start feeling sorry for myself, I think to myself “Would Keanu feel the same way?” He’s been through it all and can help me down the right path, which he does. He’s always right there by my side, being my biggest fan and toughest critic. Through the thick and thin in this sport, he always believes in me, even when I don’t. He’s taught me more than he knows.

My parents have done everything you could possibly ask from a parent. Whether it’s a ride to practice, helping with my diet, getting me additional training, school work or anything else that I may need, I know my parents are there for me. We hang out a lot and do fun normal stuff too. They know how I operate and know what works best for me. They know when to give me that extra push and when to sit back. With all of this in mind, we all know what my goal is and we work together to get there. We are a team and I couldn’t have asked for a better one.”

Koa’s brother and 157-pound State Champion from Cerritos College, Keanu Tom: “My relationship with Koa is great. We’re best friends. We spend every day together and have a lot of the same interests. We both love the same sport and the grind that comes with it. I spent a lot of time away in college and I’m trying to catch up with him before he’s off to college. I’m both a supportive brother but I can also be a hard-ass when he needs that. I’ve been in his shoes. I know the mental state he’s at and where it needs to be to keep getting better.

I’ve tried to help him maintain a good work ethic, staying focused and how to grow from failures. He and I are similar in that we are very comfortable in our neutral game and we both love wrestling in deep waters with our opponents. He does similar hand fighting positions and feet movements. What I respect most about Koa is that he doesn’t take shortcuts and he’s incredibly humble.”

Cerritos College & South Torrance High School coach Donny Garriott: “They are both very technical wrestlers. They’re both very smooth and athletic. Koa started younger, so his skills are more advanced than Keanu’s at the same age. Keanu has been very supportive and had a huge influence on his little brother. Koa was very focused at a young age.”