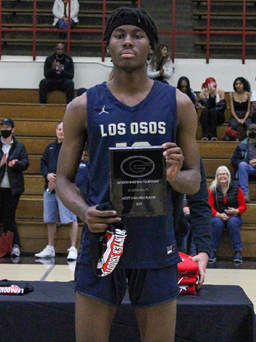 The Grizzlies improved to 10-3, thanks to Glendora Tournament wins over Bishop Amat, San Dimas, Diamond Bar and GHS.

On Tuesday, he had 22 points and 12 rebounds in a 29-point victory over Bishop Amat.

Two nights later, Tolliver finished with 16 points and 15 rebounds in the Grizzlies’ 51-34 win over San Dimas.

On Friday, Los Osos defeated Diamond Bar by 15 points in the semifinal round, and Tolliver tallied 10 points and 14 rebounds.

His teammates, Eric Shepard and Nathan Mattera, were named to the all-tournament team.