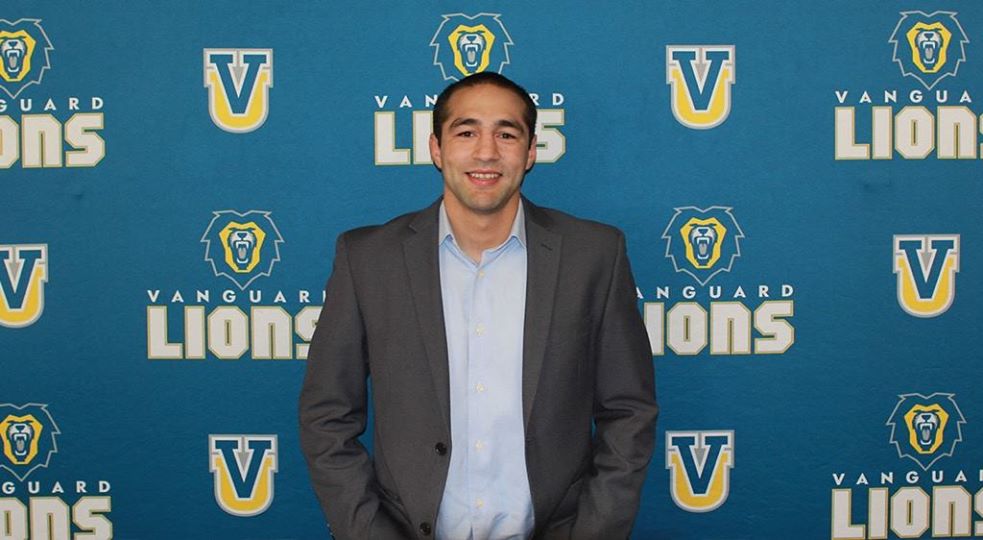 If there was one guy from the San Gabriel Valley wrestling community that had the mettle to resume a college wrestling program that hadn’t been competing since the early 1980’s, you couldn’t do better than hiring Caleb Flores.

In fact, just over a month ago, Flores was on the mats at the Rabobank Arena with coach Bobby Bellamy as the Northview contingency competed at the CIF State Meet in Bakersfield.

His love of wrestling came at a very young age, and it was his father, Elias, who coached at Rancho Cucamonga that passed along the wrestling bug to his young son.

Flores was immediately taken by the way his father was able to help steer young lives, especially those heading down the wrong path in the right direction and becoming a second father figure type.

He placed sixth, third, seventh and second, respectively, at the CIF State Meet over that remarkable four-year run.

He went on to compete at Northern Iowa University where he earned his bachelors degree and from there, Flores earned a Masters degree from Concordia.

Flores has hit the ground running, because in October of 2019, Vanguard University will be in competition and he and his soon-to-be-staff have some serious recruiting to do.

Flores resides in Glendora with his wife Teresa, who is herself a teacher and the rock of their young family.

His parents Elias and Anna have been and remain his foundation and are responsible for everything that is right about this accomplished, intelligent and respectful young man.

Flores also credits, very much, his Northview family, including obviously two of the best prep wrestling coaches in the state, Dave Ochoa and Bobby Bellamy.

And the last seven years at Mt. Sac have also instrumental as Flores evolved from competitor to leader.

In many cases, he’s always been a leader, but now the pressure lies clearly on his shoulders to not only resurrect but resume a dormant program that hasn’t been on the mat since before he was born.

But with his character and work ethic and ability to build meaningful relationships, expect Vanguard to be good sooner rather than later, because they have a winner coming to Costa Mesa.

When it comes to recruiting and reaching his athletes, Flores will have instant credibility with his resume as both a competitor and coach at the high school and college level.

Said Flores: “This is my dream job, and while I’ll miss spending time at Northview and Mt. Sac, the time was right to take on this challenge. I couldn’t be more excited to get started. I want to win, but we’re also going to do it the right way. There are no short cuts when you’re building a foundation. I look forward to having the kind of impact on young lives that I was so lucky to have impact mine.

Coach Ochoa and Bellamy and the Northview program mean everything to me, my parents deserve all the credit for whatever good qualities I’ve displayed and the time at Mt. Sac with Coach Rivera has been invaluable. My wife is the foundation and strength of this family. She does everything to make this work and I couldn’t be more lucky or grateful that she’s in my life.

I want the athletes to know we’re going to build a winner, but we’re also going to hold ourselves to a higher standard as a solid Christian school. We are going to do the right things to succeed and they will benefit in life from taking the steps necessary to become successful.”

Mt. Sac coach David Rivera: “He’s a hard worker. I was fortunate to have him as my assistant coach. It was a blessing to have him around. He’s grown a lot over the years and he’s become a great mentor. He grew up wrestling and knows the sport so well. He understands individuals and individual needs. His credibility as an athlete speaks for itself and he knows how to build relationships.”

Northview coach Dave Ochoa: “Caleb Flores has an outstanding wrestling background. He has successfully competed at the highest level. He has worked with many of the top coaches in the country. He will give everything he has to make Vanguard wrestling a success.”

“I have known Caleb since 2001, and having the experience to coach him, I witnessed his commitment to excellence first hand. He was always willing to put the needs of his peers over his own. He always wanted to help in whatever capacity he could or that we needed from him. Caleb’s ability to lead and persevere is second to none.”

Elias Flores (Caleb’s father): “At eight years old, he could already do a fireman’s carry and at the age of nine, I could tell Caleb had the talent. He loved to compete. I knew I had a champion on my hands, but I never made results the goal. It was about the work and the journey. I always tried to put him around leaders and he learned from them and gained respect. I am proud of the fact that he loves God and is a kind and honorable man.”